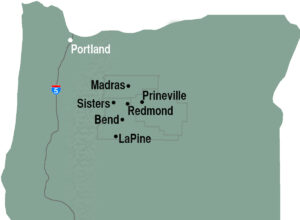 Central Oregon is located in the middle of Oregon and is made up of Deschutes, Jefferson, and Crook counties. These three counties have a combined population of 200,431 as of the 2010 census, with Deschutes the largest of the three counties, having approximately four times the population of the other two counties combined. As of 2015, the most populous city in the region is Bend, with an estimated 87,014 residents.